Crime Stoppers Branching Out to Electronic Kiosks to Spread Word 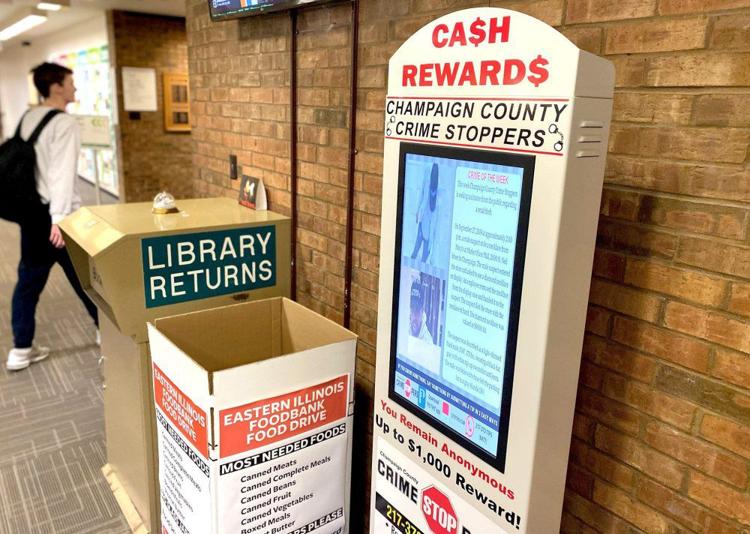 CHAMPAIGN — Branching out from newspapers, TV and radio, Champaign County Crime Stoppers has ventured into electronic kiosk technology to spread its message.

Earlier this month, the crime-prevention and public-safety organization put a kiosk in the X wing at Parkland College, near the library stairs.

“We can change it by the minute,” said Dawn Coyne Trimble, vice president of the group’s board of directors

The chief purpose of the kiosk is to advertise people wanted for crimes, information about unsolved crimes and prevention tips. Amber Alerts about missing children will also be featured.

But Trimble said there will also be messages about the weather and Parkland activities, such as upcoming registration, so as not to be all gloom and doom.

The kiosk was funded by a $5,000 grant from Rotary. Trimble said that covered the $4,000 cost of the machine and about a year’s worth of fees and maintenance.

“It runs off a Verizon closed-circuit internet connection (as opposed to Parkland WiFi) to prevent hacking,” she said.

A handful of people at Parkland and members of the Crime Stoppers board have the ability to program the messages.

Trimble, who also serves on Crime Stoppers’ state and national boards, said she had seen the kiosks at past conferences and was hoping to incorporate one here. It just took cash to get the job done.

“We haven’t had really had a ton of feedback” since its Nov. 6 launch, she said. “It seems like people are stopping and taking a look at it.”

Parkland Chief of Police William Colbrook said he’s pleased that the college is the first partner to house such a kiosk.

“It fits with our community engagement mission and enhances campus safety,” he said.