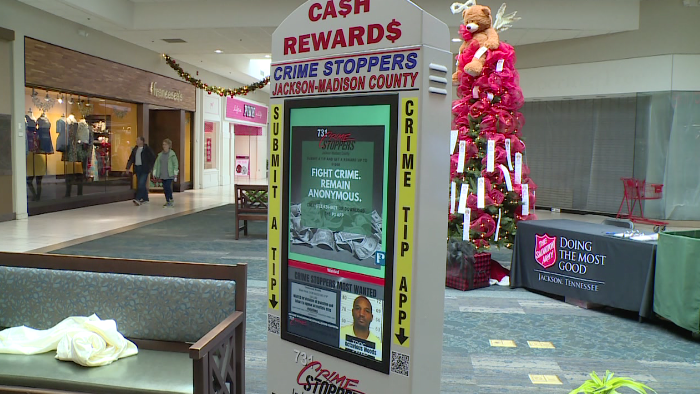 Wanted posters and public service announcements are just some of the things that can be found on the new Jackson-Madison County Crime Stoppers kiosks.

“We can put Nixle alerts and Amber Alerts when they come out, and crimes that happen in Jackson-Madison County,” said Lt. Mike Johnson, director of Crime Stoppers. “As soon as they happen, the sheriff’s department and police department sends us a picture. We can put the suspect on there immediately for our office.”

Jackson Madison County Crimestoppers will be the first in the region to try it out. It is also the first one in the state of Tennessee.

“We want to put them in areas that everyone is coming,” Sheriff John Mehr said. “We want them populated areas like Walmart, Lowe’s and Home Depot. Since Jackson is the Hub City, you got 200 to 300-thousand people that come through here every day.”

Officials say this kiosk will also act as a deterrent.

“There’s somebody we are looking for, somebody that is wanted. What do you think when that person walks into the mall, they came walking through the mall, looked up and there they are on the kiosk,” Sheriff Mehr said. “So they are going to know that people are looking for them, and you walk up behind him, and so that’s him or that’s her.”

Jackson-Madison County Crime Stoppers has only purchased one kiosk so far, but they expect this initiative to grow in popularity and support.

“We are going to get two more and place them throughout the city and the county,” Sheriff Mehr said. “Hopefully we can sell advertisement on there and it can help people so we can buy more and more of them . It’s just another way Crime Stoppers and the board of directors wants to give back to the community.”