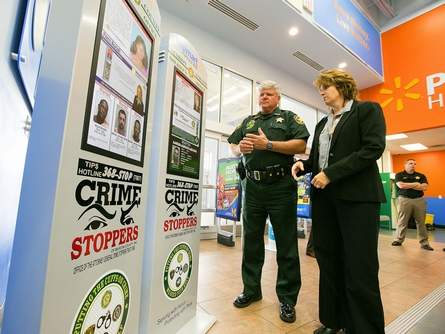 They might not spit out a DVD or reveal a bank balance, but the information on these kiosk screens could catch a criminal or even save a life. And, it seems, local businesses and the people who frequent them are relying on the Sheriff’s Office crime-prevention kiosks that are appearing in more corners of the county.

“They’re in all of our stores,” said Kevin Camp, operating partner and co-owner of the Burger King outlets in Marion County. “People look at them constantly; I find myself looking at them whenever I’m in one of our stores.”

Marion County Sheriff Chris Blair would like even more of them; he’s expected to request funding Tuesday from the Marion County Commission for another 20 of these locally built kiosks.

Initiated in mid-2014, some 100 of these information stations are scattered throughout Marion County in community centers, grocery stores, convenience stores, county and city offices, and pawn shops from Marion Oaks to Scrambletown. The initial cost was $300,000. A few months after the program launched, it was recognized by the Florida Crime Prevention Association as the Outstanding Crime Prevention Program of 2014.

“As you are aware, the kiosk program has been an extremely successful endeavor over the two years and I would like to continue expanding the program,” Blair wrote in a letter to the County Commission seeking $64,060 from the Crime Prevention Fund – which is funded through fines, not taxes.

The amount Blair is asking would cover the cost of the kiosks as well as monthly licensing and wireless connection fees for a year.

These stations are more of a free-standing flat panel than an actual kiosk. They feature a video screen divided horizontally three ways: for emergency alerts such as amber and silver alerts, public service information about weather and crime-prevention tips, and the county’s most wanted and notices of newly registered sex offenders.

Where the additional 20 would go hasn’t been determined yet, noted MCSO Public Information Officer Lt. Ryan Robbins. “Many businesses have requested them such as convenience stores and drug stores,” he wrote in an email. “We are still evaluating the stores and locations with the most traffic to make final decisions.”

But he added that the MCSO is not able to determine exactly how many of these captures are directly related to the kiosks themselves. “There are many different ways people can report wanted persons’ locations,” he said.

Still, among the success stories, Robbins said, are several people who weren’t aware there was a warrant out for their arrest turning themselves in after seeing their picture on a kiosk screen. He added that similar kiosks are used in more than 18 other Florida counties and three other states.

“It really does raise awareness,” Camp said of the kiosks in his Burger King locations. “It’s very timely information, updated daily. We’ve noticed people come in and just watch the screens as they scroll.”