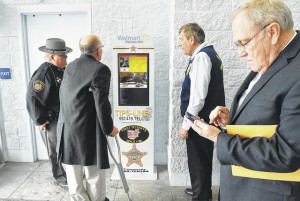 SIDNEY — A new way to keep the community safe has been installed in the vestibule of Wal-Mart in Sidney.

The Pro-Tektor device, installed on Wednesday, is aimed at preventing crime and getting information to the public quickly, according to Shelby County Chief Deputy Jim Frye.

The five and a half feet tall electronic kiosk is personalized in real time with information programmed into it remotely from the sheriff’s office.

Frye said they can broadcast anything from missing persons to wanted persons, to weather alerts and amber alerts. This kiosk is the only in Ohio and the Sheriff’s Office has another one they hope to install somewhere around town soon.

“Teaming up with Wal-Mart made sense because about 5,000 people come through here daily,” Shelby County Sheriff John Lenhart said.

The Pro-Tektor devices are primarily in Florida, but the company who makes the kiosk has a goal of getting them in stores all around the country.

The devices cost about $3,500 each and have a recurring cost of around $1,000 a year for the cell coverage to be able to remotely operate them.

“The money for them came from money the sheriff’s office gets from the courts,” Lenhart said. “We like to use the funds for educational or crime prevention purposes. In the past we have used this money for items like the speed monitoring trailer that tells you how fast you are driving as you pass it.”

The kiosk not only displays important information to the public, it can project audio from it’s speakers as well. On Wednesday it was broadcasting Lenhart’s Safety Tip of the Week radio segment. Emergency broadcasts, similar to messages broadcast on the radio and television when there is an emergency, can be broadcast through this device as well.

The crime prevention notification system is award winning and has been credited with the finding of missing children and adults, fugitives, and shoplifters right from inside Wal-Mart. The information from the kiosk here in Shelby County can also be loaded to a kiosk in another state if needed.

Lenhart and Frye hope this device will be successful in getting information out to the public in a timely manner.